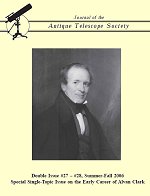 More than two dozen documents previously unknown to historians shed new light on the early struggles of the nineteenth-century American telescope-maker Alvan Clark to establish his reputation for his astronomical expertise and optical skill. The documents, ranging from manuscript letters and notes to letters to newspaper editors—have been made public for the first time in the Summer/Fall 2006 issue of the Journal of the Antique Telescope Society, published this month as a single-topic double-length issue devoted to Clark’s early telescope-making efforts.

“This special Alvan Clark issue of the Journal of the Antique Telescope Society is the most significant publication of new material about Alvan Clark since 1995,” declared the Antique Telescope Society’s president, Dr. Michael Reynolds, F.R.A.S., associate dean of mathematics and natural sciences and professor of astronomy at Florida Community College in Jacksonville, and executive director emeritus of the Chabot Space and Science Center in Oakland, California. (In 1995, Deborah Jean Warner and Robert B. Ariail published their now-classic biography and catalogue Alvan Clark & Sons: Artists in Optics [second edition, Richmond, Va.: Willmann–Bell, in association with the National Museum of American History, Smithsonian Institution].)